Highlights of APPRA in the IPRA 2012 Conference, Japan
A new executive body of APPRA has been formed at the IPRA Conference. That is as follows:
******* 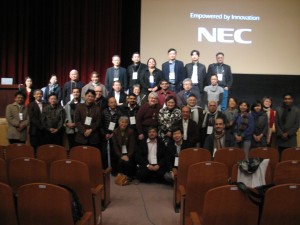 Minutes of APPRA Meeting
Dated : 26-11-2012
Venue: Sansui Hall Auditorium
• With the opening of the meeting, Prof. Akihiko alongwith Prof. Vidya Jain, shared their views on their Edited Volume on “New Paradigm of Peace Research – The Asia-Pacific Context”, published by Rawat Publications, which was well taken up by everyone.
• In the second segment, Dr. Ravi Bhatia also shared his views on his book related to Peace, Religion and Environment, which was also well taken up by everyone
• Prof. Akihiko Kimijima (JAPAN) and Prof. Vidya Jain (INDIA) were unanimously elected as the two Co-Secretary General of the APPRA group.
• The names of Dr. (Ms.) Janjira Sombatpoonsiri (Thailand) and Dr. Manish Sharma (India) were also unanimously forwarded for the inclusion in the panel of IPRA Council from the Asia-pacific region, which was accepted by the IPRA Council. The two other names who are in the IPRA Council are Jeannie Lum ( USA ) and Tetsu Sadotoma (Japan)
• Five members were also elected in the APPRA Council, Bishnu (Nepal), Jennifer Santiago Oreta (Philippines), Prof. Liu Cheng (China) and one from Japan region.
• Also resolved to bring one by-annually e-news letter from the APPRA group, which would cover the regional news and the research going on in the respective areas.
• For further inputs and contributions please write to the new Co-Secretary Generals.