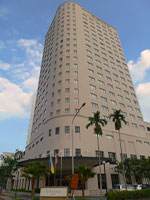 In both Christchurch and Penang conferences, the need for regional, cultural, gender sensitivity was strongly articulated. Notwithstanding an appreciation for peace stalwarts like Johan Galtung, participants from the South stressed the importance of indigenous ways of solving conflict and building peace. The women’s perspective came out loud and clear. A hunger for spiritual perspectives for peace workers also was expressed. A trend to be more mindful of the rich culture of Asia and the Pacific emerged.

Secretariat Based in Japan

When Katsuya Kodama was voted in to the position of APPRA Secretary General (1994-2000), the secretariat moved to the University of Mie, Japan. During these years APPRA received strong support from the Peace Studies Association of Japan (PSAJ) with its 800 members.

From APPRA to IPRA Leadership

During this period several APPRA members played important roles in the International Peace Research Association. Three APPRA Secretary Generals were elected to key positions in International Peace Research Association. In 1994 Kevin Clements became president of IPRA and of the IPRA Foundation. In 1998 Katsuya Kodama was elected IPRA vice-president (1998-2002). Both Yoshikazu Sakamoto and Katsuya Kodama have served as IPRA Secretary-General.

Mary Soledad L. Perpinan was a founding co-convenor of the IPRA Commission for Women and Peace (now Gender and Peace); and John Synott was one of the founding co-convenors of the Commission for the Rights of Indigenous People. Both of these commissions continue to have strong involvement from APPRA members. In addition Ralph Summy and John Synott, both APPRA members, were organisers of the 1996 IPRA conference in Brisbane. This first IPRA conference in the Asia-Pacific region was followed by the 19th IPRA general meeting in Suwon, Korea, in 2002. Since that time the IPRA 2010 conference was held at University of Sydney, Australia and the 2012 conference will be held once more in Japan at Mie University. Professor Katsuya Kodama was elected as joint Secretary-General of IPRA in 2010 and will host the 2012 conference.

Mary Soledad L. Perpinan, of the Philippines, was elected in 1998 as Secretary- General of APPRA. She accepted the role on condition that it would not be a token position. As a woman from a developing country she was determined to work hard and overcome the difficulties of having few resources available to her when she assumed the post. She had the advantage of a lot of support from her home organisation, the Third World Movement Against the Exploitation of Women (TW-MAE-W), along with Philippine NGOs, and a rich and wide network in the international arena. [Sr. Mary Soledad L. Perpinan passed away in 2011, RIP]